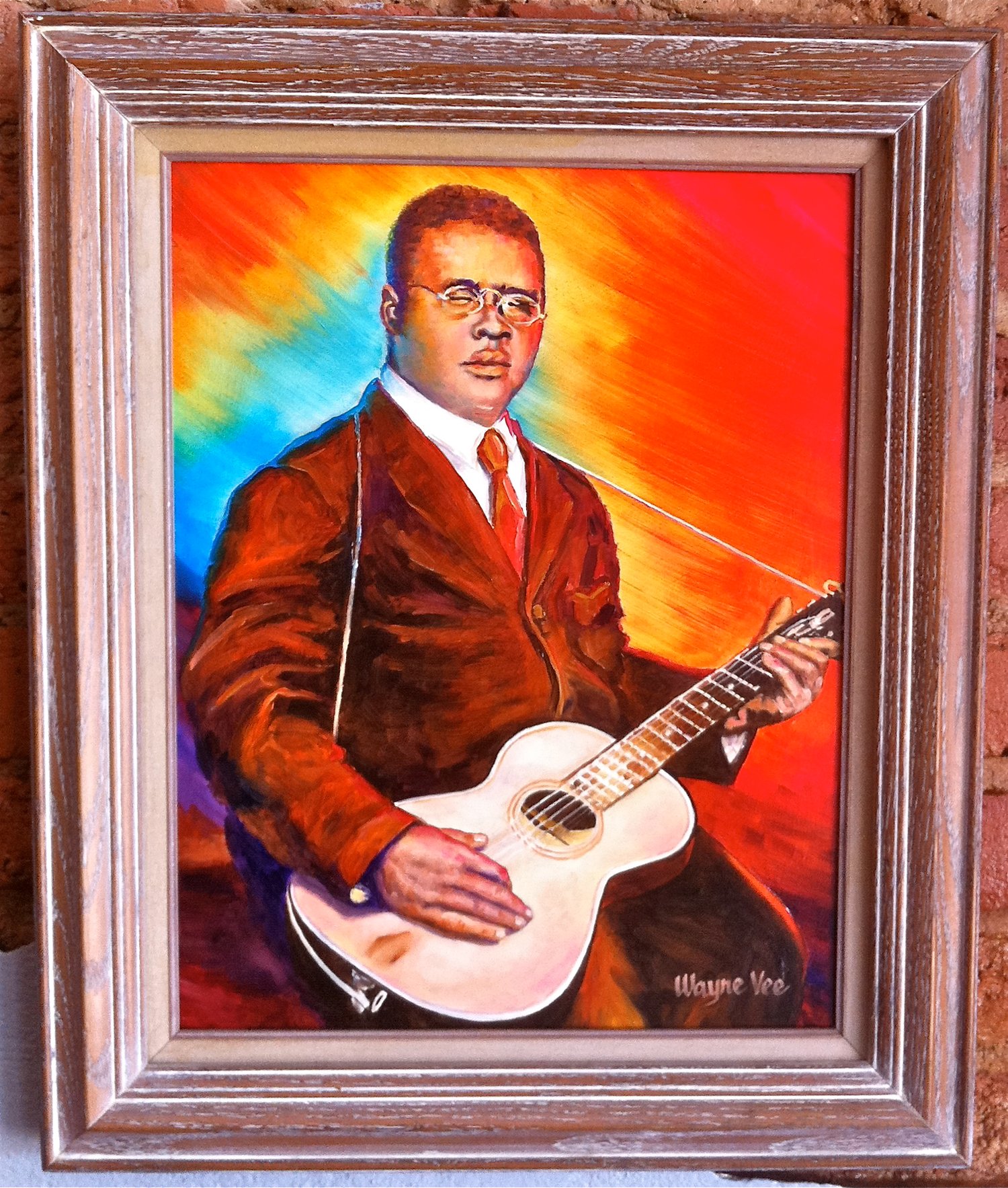 BLIND "LEMON" JEFFERSON
Lemon Henry "Blind Lemon" Jefferson (September 24, 1893 – December 19, 1929) was an American blues and gospel singer, songwriter, and musician. He was one of the most popular blues singers of the 1920s and has been called the "Father of the Texas Blues".

Jefferson's performances were distinctive because of his high-pitched voice and the originality of his guitar playing. His recordings sold well, but he was not a strong influence on younger blues singers of his generation, who could not imitate him as easily as they could other commercially successful artists. Later blues and rock and roll musicians, however, did attempt to imitate both his songs and his musical style.

Early Life
Jefferson was born blind (or possibly partially blind), near Coutchman, Texas. He was the youngest of seven (or possibly eight) children born to Alex and Clarissa Jefferson, who were African-American sharecroppers. Disputes regarding the date of his birth derive from contradictory census records and draft registration records. By 1900, the family was farming southeast of Streetman, Texas. Jefferson's birth date was recorded as September 1893 in the 1900 census. The 1910 census, taken in May, before his birthday, confirms his year of birth as 1893 and indicated that the family was farming northwest of Wortham, near his birthplace.

In his 1917 draft registration, Jefferson gave his birth date as October 26, 1894, stating that he lived in Dallas, Texas, and had been blind since birth. In the 1920 census, he is recorded as having returned to Freestone County and was living with his half-brother, Kit Banks, on a farm between Wortham and Streetman.

Jefferson began playing the guitar in his early teens and soon after he began performing at picnics and parties. He became a street musician, playing in East Texas towns in front of barbershops and on street corners. According to his cousin Alec Jefferson, quoted in the notes for Blind Lemon Jefferson, Classic Sides:

"They were rough. Men were hustling women and selling bootleg and Lemon was singing for them all night... he'd start singing about eight and go on until four in the morning... mostly it would be just him sitting there and playing and singing all night".

In the early 1910s, Jefferson began traveling frequently to Dallas, where he met and played with the blues musician Lead Belly. Jefferson was one of the earliest and most prominent figures in the blues movement developing in the Deep Ellum section of Dallas. It is likely that he moved to Deep Ellum on a more permanent basis by 1917, where he met Aaron Thibeaux Walker, also known as T-Bone Walker. Jefferson taught Walker the basics of playing blues guitar in exchange for Walker's occasional services as a guide. By the early 1920s, Jefferson was earning enough money for his musical performances to support a wife and, possibly, a child. However, firm evidence of his marriage and children has not been found.

Beginning of Recording Career
Prior to Jefferson, few artists had recorded solo voice and blues guitar, the first of which were the vocalist Sara Martin and the guitarist Sylvester Weaver, who recorded "Longing for Daddy Blues", probably on October 24, 1923. The first self-accompanied solo performer of a self-composed blues song was Lee Morse, whose "Mail Man Blues" was recorded on October 7, 1924. Jefferson's music is uninhibited and represented the classic sounds of everyday life, from a honky-tonk to a country picnic, to street corner blues, to work in the burgeoning oil fields (a reflection of his interest in mechanical objects and processes).

Jefferson did what few had ever done before him – he became a successful solo guitarist and male vocalist in the commercial recording world. Unlike many artists who were "discovered" and recorded in their normal venues, Jefferson was taken to Chicago, Illinois, in December 1925 or January 1926 to record his first tracks. Uncharacteristically, his first two recordings from this session were gospel songs ("I Want to Be Like Jesus in My Heart" and "All I Want Is That Pure Religion"), released under the name Deacon L. J. Bates. A second recording session was held in March 1926. His first releases under his own name, "Booster Blues" and "Dry Southern Blues", were hits. Their popularity led to the release of the other two songs from that session, "Got the Blues" and "Long Lonesome Blues", which became a runaway success, with sales in six figures. He recorded about 100 tracks between 1926 and 1929; 43 records were issued, all but one for Paramount Records. Paramount's studio techniques and quality were poor, and the recordings were released with poor sound quality. In May 1926, Paramount re-recorded Jefferson performing his hits "Got the Blues" and "Long Lonesome Blues" in the superior facilities at Marsh Laboratories, and subsequent releases used those versions. Both versions appear on compilation albums.

Success with Paramount Records
Largely because of the popularity of artists such as Jefferson and his contemporaries Blind Blake and Ma Rainey, Paramount became the leading recording company for the blues in the 1920s. Jefferson's earnings reputedly enabled him to buy a car and employ chauffeurs (this information has been disputed); he was given a Ford car "worth over $700" by Mayo Williams, Paramount's connection with the black community. This was a common compensation for recording rights in that market. Jefferson is known to have done an unusual amount of traveling for the time in the American South, which is reflected in the difficulty of placing his music in a single regional category.

Jefferson's "old-fashioned" sound and confident musicianship made it easy to market him. His skillful guitar playing and impressive vocal range opened the door for a new generation of male solo blues performers, such as Furry Lewis, Charlie Patton, and Barbecue Bob. He stuck to no musical conventions, varying his riffs and rhythm and singing complex and expressive lyrics in a manner exceptional at the time for a "simple country blues singer." According to the North Carolina musician Walter Davis, Jefferson played on the streets in Johnson City, Tennessee, during the early 1920s, at which time Davis and the entertainer Clarence Greene learned the art of blues guitar.

Jefferson was reputedly unhappy with his royalties (although Williams said that Jefferson had a bank account containing as much as $1500). In 1927, when Williams moved to Okeh Records, he took Jefferson with him, and Okeh quickly recorded and released Jefferson's "Matchbox Blues", backed with "Black Snake Moan". It was his only Okeh recording, probably because of contractual obligations with Paramount. Jefferson's two songs released on Okeh have considerably better sound quality than his Paramount records at the time. When he returned to Paramount a few months later, "Matchbox Blues" had already become such a hit that Paramount re-recorded and released two new versions, with the producer Arthur Laibly. In 1927, Jefferson recorded another of his classic songs, the haunting "See That My Grave Is Kept Clean" (again using the pseudonym Deacon L. J. Bates), and two other uncharacteristically spiritual songs, "He Arose from the Dead" and "Where Shall I Be". "See That My Grave Is Kept Clean" was so successful that it was re-recorded and re-released in 1928.

Death and Grave
Jefferson died in Chicago at 10:00 a.m. on December 19, 1929, of what his death certificate said was "probably acute myocarditis". For many years, rumors circulated that a jealous lover had poisoned his coffee, but a more likely explanation is that he died of a heart attack after becoming disoriented during a snowstorm. Some have said that he died of a heart attack after being attacked by a dog in the middle of the night. The book Tolbert's Texas claimed that he was killed while being robbed of a large royalty payment by a guide escorting him to Union Station to catch a train home to Texas. Paramount Records paid for the return of his body to Texas by train, accompanied by the pianist William Ezell.

Jefferson was buried at Wortham Negro Cemetery (later Wortham Black Cemetery). Far from being kept clean, his grave was unmarked until 1967, when a Texas historical marker was erected in the general area of his plot, the precise location of which is unknown. By 1996, the cemetery and marker were in poor condition, and a new granite headstone was erected in 1997. In 2007, the cemetery's name was changed to Blind Lemon Memorial Cemetery, and his gravesite is kept clean by a cemetery committee in Wortham, Texas.