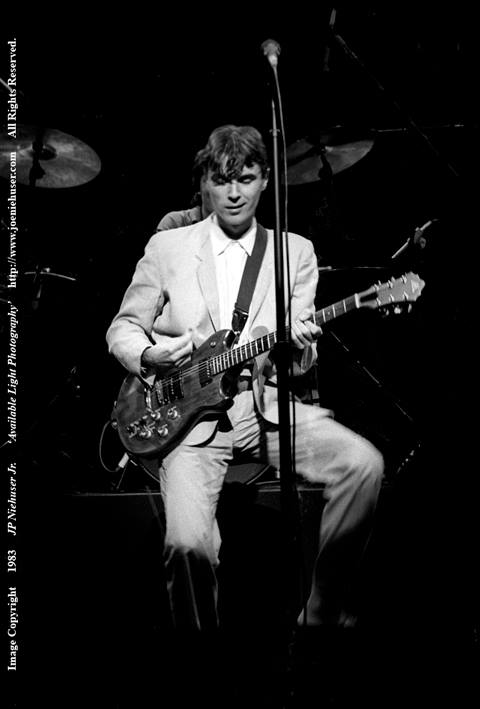 DAVID BYRNE
David Byrne (born 14 May 1952) is a Scottish-born American musician who was the founding member, principal songwriter, and lead singer and guitarist of the American new wave band Talking Heads, active between 1975 and 1991. Byrne is a multi-instrumentalist and is known for his distinctive voice.

Byrne graduated from Lansdowne High School in southwest Baltimore County. He started his musical career in a high school band called Revelation, then between 1971 and 1972, he was one half of a duo named Bizadi with Marc Kehoe. Their repertoire consisted mostly of songs such as "April Showers", "96 Tears", "Dancing on the Ceiling" and Frank Sinatra songs. Byrne attended the Rhode Island School of Design (during the 1970–71 term) and the Maryland Institute College of Art (during the 1971–72 term) before dropping out. He returned to Providence in 1973 and formed a band called the Artistics with fellow RISD student Chris Frantz. The band dissolved in 1974. Byrne moved to New York City in May that year and was joined by Frantz and his girlfriend Tina Weymouth in September. Unable to find a bass player in New York, Frantz and Byrne persuaded Weymouth to learn to play the bass guitar. Byrne gave her lessons.

While working day jobs in late 1974, they were contemplating a band. By January 1975, they were practicing and playing together, while still working normal day jobs. They founded the band Talking Heads and had their first gig in June. Byrne quit his day job in May 1976 and the three-piece band signed to Sire Records in November. Multi-instrumentalist Jerry Harrison joined the band in 1977. Byrne was instrumental in the creation of Stop Making Sense, a 1984 concert film featuring a live performance by Talking Heads. Directed by Jonathan Demme, it was shot over the course of three nights at Hollywood's Pantages Theater in December 1983, as the group was touring to promote their new album Speaking in Tongues. The movie is notable for being the first made entirely using digital audio techniques. The band raised the budget of $1.2 million themselves. The film has been hailed by Leonard Maltin as "one of the greatest rock movies ever made", and Pauline Kael of The New Yorker described it as "...close to perfection." The band released eight studio albums before going into hiatus in 1988. Byrne desired to go solo, but it took three years until 1991 to announce that the band was breaking up. A brief reunion for a single "Sax and Violins" in 1991 occurred before dissolving again. The band was inducted into the Rock and Roll Hall of Fame in 2002, when they reunited to play four tracks, including "Psycho Killer" and "Burning Down the House".

During his time in the band, Byrne took on outside projects, collaborating with Brian Eno during 1979 and 1981 on the album My Life in the Bush of Ghosts, which attracted considerable critical acclaim due to its early use of analogue sampling and found sounds. Following this record, Byrne focused his attention on Talking Heads. My Life in the Bush of Ghosts was re-released for its 25th anniversary in early 2006, with new bonus tracks. In keeping with the spirit of the original album, stems for two of the songs' component tracks were released under Creative Commons licenses and a remix contest site was launched.

Rei Momo (1989) was the first solo album by Byrne after leaving Talking Heads, and features mainly Afro-Cuban, Afro-Hispanic, and Brazilian song styles including popular dances including merengue, son cubano, samba, mambo, cumbia, cha-cha-chá, bomba and charanga. His third solo album, Uh-Oh (1992), featured a brass section and was driven by catchy tracks such as "Girls on My Mind" and "The Cowboy Mambo (Hey Lookit Me Now)". His fourth solo album, titled David Byrne (1994), was a more proper rock record, with Byrne playing most of the instruments on it, leaving percussion for session musicians. "Angels" and "Back in the Box" were the two main singles released from the album. The first one entered the US Modern Rock Tracks chart, reaching No. 24. For his fifth studio effort the emotional Feelings (1997), Byrne employed a brass orchestra called Black Cat Orchestra. His sixth Look into the Eyeball (2001) continued the same musical exploration of Feelings, but was compiled of more upbeat tracks, like those found on Uh-Oh.

Grown Backwards (2004), released by Nonesuch Records, used orchestral string arrangements, and includes two operatic arias as well as a rework of X-Press 2 collaboration "Lazy". He also launched a North American and Australian tour with the Tosca Strings. This tour ended with Los Angeles, San Diego and New York shows in August 2005. He has also collaborated with Selena for her 1995 album Dreaming Of You with God's Child (Baila Conmigo) in 1995.

Byrne and Eno reunited for his eighth album Everything That Happens Will Happen Today (2008). He assembled a band to tour worldwide for the album for a six-month period from late 2008 through early 2009 on the Songs of David Byrne and Brian Eno Tour.

In 2012 he released a collaborative album with American singer songwriter St. Vincent called Love This Giant.

In 1981, Byrne partnered with choreographer Twyla Tharp, scoring music he wrote that appeared on his album The Catherine Wheel for a ballet with the same name, prominently featuring unusual rhythms and lyrics. Productions of The Catherine Wheel appeared on Broadway that same year. In Spite of Wishing and Wanting is a soundscape David Byrne produced for the Belgian choreographer Wim Vandekeybus's dance company Ultima Vez.

In 1991, Byrne released a classical instrumental album The Forest, where some of the tracks were already featured as a score for 1988 Robert Wilson theatre piece of the same name.

His work has been extensively used in film soundtracks, most notably in collaboration with Ryuichi Sakamoto and Cong Su on Bernardo Bertolucci's The Last Emperor, which won an Academy Award for Best Original Score. In 2004, Lead Us Not into Temptation (music from the film "Young Adam") included tracks and musical experiments from his score to Young Adam. Byrne also wrote, directed, and starred in True Stories, a musical collage of discordant Americana released in 1986, as well as producing most of the film's music. Byrne also directed the documentary Île Aiye and the concert film of his 1992 Latin-tinged tour titled Between the Teeth. He was chiefly responsible for the stage design and choreography of Stop Making Sense in 1984. Byrne added "Loco de Amor" with Celia Cruz to Jonathan Demme's 1986 film Something Wild.

Byrne wrote the Dirty Dozen Brass Band-inspired score for Robert Wilson's Opera The Knee Plays from The Civil Wars: A Tree Is Best Measured When It Is Down. Some of the music from Byrne's orchestral album The Forest was originally used in a Wilson-directed theatre piece with the same name. The Forest premiered at the Theater der Freien Volksbühne, Berlin in 1988. It received its New York premiere in December 1988 at the Brooklyn Academy of Music (BAM). The Forestry Maxi-single contained dance and industrial remixes of pieces from The Forest by Jack Dangers, Rudy Tambala, and Anthony Capel.

In late 2005, Byrne and Fatboy Slim began work on Here Lies Love, a disco opera or song cycle about the life of Imelda Marcos, the controversial former First Lady of the Philippines. Some music from this piece was debuted at Adelaide Festival of Arts in Australia in February 2006 and the following year at Carnegie Hall on 3 February 2007.

Byrne has contributed songs to five AIDS benefit compilation albums produced by the Red Hot Organization: Red Hot + Blue: A Tribute to Cole Porter, Red Hot + Rio, Silencio=Muerte: Red Hot + Latin, Onda Sonora: Red Hot + Lisbon, and Offbeat: A Red Hot Soundtrip. Byrne appeared as a guest vocalist/guitarist for 10,000 Maniacs during their MTV Unplugged concert, though the songs in which he is featured were cut from their following album. One of them, "Let the Mystery Be", appeared as the fourth track on 10,000 Maniacs' CD single "Few and Far Between". Byrne worked with Latin superstar Selena, writing, producing and singing a song ("God's Child (Baila Conmigo)"), included on her last album before her murder, Dreaming of You. Byrne was the host of Sessions at West 54th during its second of three seasons and collaborated with members of Devo and Morcheeba to record the album Feelings in 1997.

In 1992 he performed with Richard Thompson. Their joint acoustic concert at St. Ann & The Holy Trinity in Brooklyn Heights, New York on March 24, produced the album An Acoustic Evening which was released the same year.

In 2001 a version of Byrne's single "Like Humans Do", edited to remove its drug reference, was selected by Microsoft as the sample music for Windows XP to demonstrate Windows Media Player.

In 2002, he co-wrote and provided vocals for a track, "Lazy" by X-Press 2, which reached No. 2 in the United Kingdom and number-one on the US Dance Charts. Byrne said in an interview on BBC Four Sessions coverage of his Union Chapel performance that "Lazy" was number-one in Syria. The track later featured with orchestral arrangements on his Grown Backwards (2004) album.

In 2006, his singing was featured on "The Heart's a Lonely Hunter" on The Cosmic Game by Thievery Corporation.

He is featured on the tracks "Money" and "The People Tree", on N.A.S.A.'s 2009 album The Spirit of Apollo. Also in 2009, Byrne appeared on HIV/AIDS charity album Dark Was the Night for Red Hot Organization. He collaborated with Dirty Projectors on the song "Knotty Pine". In the same year, Byrne performed at the Bonnaroo Music Festival in Manchester, Tennessee. He also was a signator of a letter protesting the decision of the Toronto International Film Festival to choose Tel Aviv as the subject of its inaugural City-to-City Spotlight strand.

In 2007, Byrne provided a cover of the Fiery Furnaces' song "Ex-Guru" for a compilation to celebrate the 15th anniversary of the founding of Thrill Jockey, a Chicago-based record label.

In 2008, Byrne and his production team turned the Battery Maritime Building, a 99-year-old ferry terminal in Manhattan, into a playable musical instrument. The structure was connected electronically to a pipe organ and made playable for a piece called "Playing the Building". This project was previously installed in Stockholm, Sweden in 2005, and later at the London Roundhouse in 2009. It bears similarities to a series of installations created by New Zealand and Detroit based artists Alastair Galbraith and Matt De Genaro, which were recorded on their 1998 record Wire Music and on the 2006 follow-up Long Wires in Dark Museums, Vol. 2. Byrne says that the point of the project was to allow people to experience art first hand, by creating music with the organ, rather than simply looking at it.[19]

In April 2008, Byrne took part in the Paul Simon retrospective concert series at BAM performing "You Can Call Me Al" and "I Know What I Know" from Simon's Graceland album.

In 2008, Byrne collaborated with the Brighton Port Authority, composing the music and singing the lyrics for "Toe Jam".

In May 2011, Byrne contributed backing vocals to the Arcade Fire track "Speaking in Tongues" which appeared on the deluxe edition of their 2010 album The Suburbs.

In March 2013, he debuted a fully staged production of his 2010 concept album Here Lies Love at New York's Public Theater, directed by Tony Award-nominee Alex Timbers following its premiere at MoCA earlier in the year.

In May 2014, Byrne announced his involvement with Anna Calvi's EP, Strange Weather, collaborating with her on two songs: a cover of Keren Ann's "Strange Weather" and Connan Mockasin's "I'm the Man, That Will Find You".

In August 2016, Byrne was featured on "Snoopies" on the Kickstarter-funded album, and the Anonymous Nobody... by De La Soul.