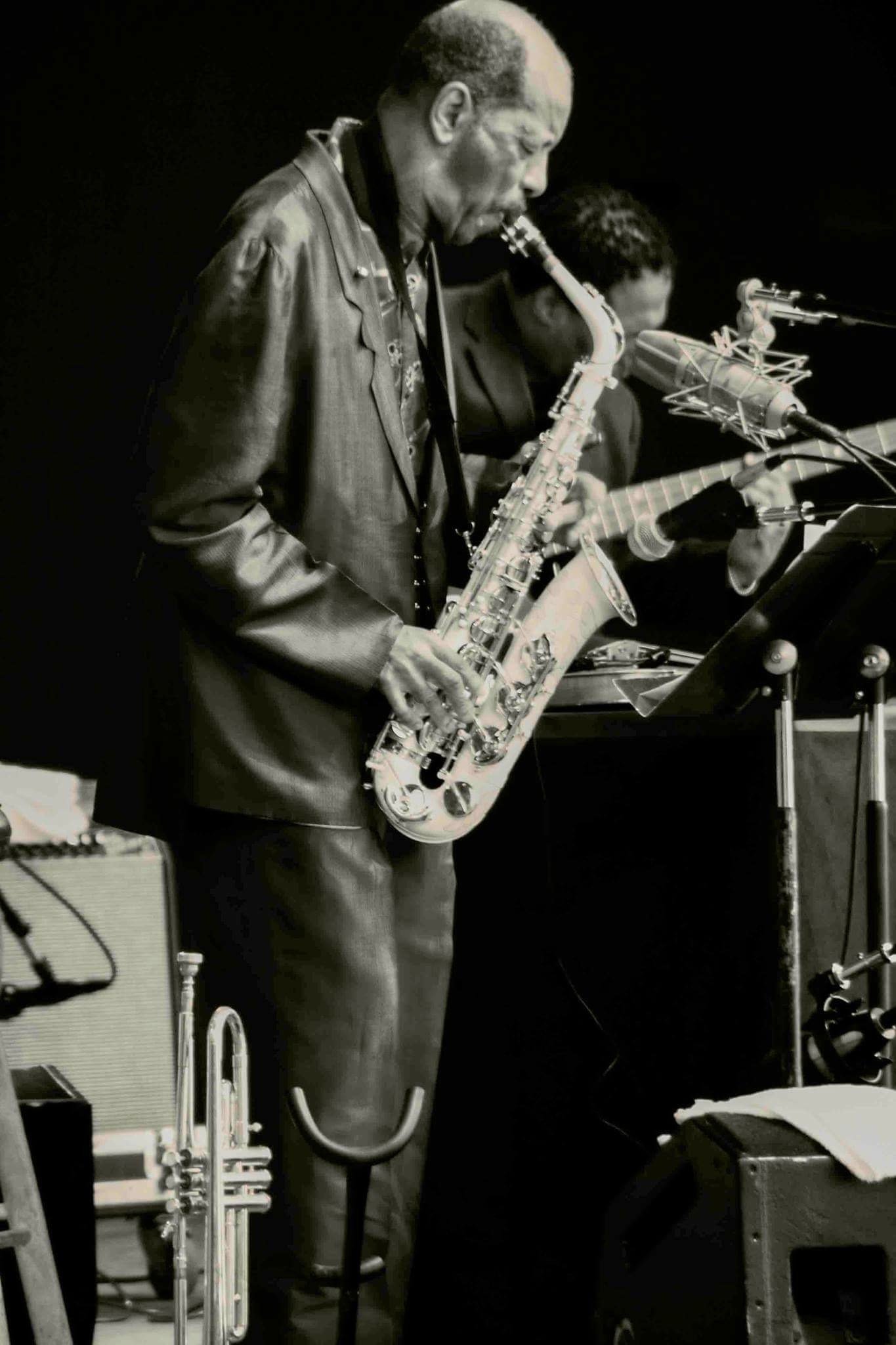 Pricing for A2 and A3 sizes, in 1/1 Editions, available upon request

ORNETTE COLEMAN
Randolph Denard Ornette Coleman (March 9, 1930 – June 11, 2015) was an American jazz saxophonist, violinist, trumpeter, and composer. Coleman was one of the most powerful and contentious innovators in the history of jazz.

Ornette Coleman's bluesy, playful music revolutionized jazz in the '60s by ignoring regular harmonies and rhythms. In the '70s he formalized his "harmolodic" theory and applied it to rock instrumentation with his group, Prime Time, pioneering a powerful and increasingly influential jazz-rock-funk-ethnic-music fusion. In the late '90s, he enjoyed a considerable revival of interest.

Coleman taught himself to play alto sax in his early teens. At 16, he switched to tenor sax and began playing in R&B and jazz bands around the South. His unorthodox notions of music were already meeting resistance (he switched back to alto sax when three members of the audience in Baton Rouge threw his tenor sax over a cliff), and he got used to getting fired. In 1950 he wrote an unpublished book in which he theorized that melody "has nothing to do with harmony or chords or key centers."

In 1952 he went to L.A. with the Pee Wee Crayton Band. He returned to Fort Worth after Crayton fired him, then returned to L.A. in 1954. The L.A. jazz community ignored him for most of the decade. In 1958 he formed his first band with trumpeter Don Cherry, bassist Charlie Haden, and drummer Billy Higgins and established a mode of playing in which, as he explained, "no one player has the lead; anyone can come out with it at any time."

In 1959 the Coleman quartet went to New York, where their engagements and recordings developed the concept of "free jazz." For Free Jazz, a collective improvisation, Coleman employed a "double quartet" (drummers Higgins and Ed Blackwell, trumpeters Cherry and Freddie Hubbard, bassists Haden and Scott LaFaro, and reedmen Coleman and Eric Dolphy).

Coleman withdrew from the public between 1962 and 1965, during which time he taught himself to play the trumpet and violin. When he resumed performing, he introduced compositions for these instruments and for wind quintets, larger chamber orchestras, and vocalists. He rarely performed with a regular band, although he continued to collaborate with Haden, Cherry, Higgins, Blackwell, and tenor saxophonist Dewey Redman. (In the late '70s Cherry, Haden, Redman, and Blackwell formed Old and New Dreams, playing their own music and occasional new Coleman tunes.) He also played with saxophonist Pharoah Sanders, drummer Elvin Jones, and Yoko Ono, whose 1968 performance with Coleman's band is documented on her 1970 Yoko Ono/Plastic Ono Band.

A Guggenheim fellowship allowed him to compose Skies of America, a long work for orchestra that he debuted at 1972's Newport in New York Festival and recorded later that year with the London Symphony Orchestra. Skies of America introduced his theory of "harmolody," in which harmonies, rhythms, and melodies function independently.

Coleman went to Morocco in 1973 to record with the Master Musicians of Joujouka (a short selection was included on Dancing in Your Head), and in New York and Paris, he became interested in the guitar and electrified instruments and started working with guitarist James Blood Ulmer. He rehearsed a new band, Prime Time —electric guitarists Bern Nix and Charles Ellerbee, electric bassist Jamaaladeen Tacuma, and drummers Ronald Shannon Jackson and his son Denardo Coleman —for two years before recording Dancing in Your Head in Paris and introducing them at the 1977 Newport in New York Festival.

Prime Time's music incorporated rock and funk rhythms and melodic fragments that recall Joujouka and R&B among its harmolodic possibilities; Coleman stated that he considered it dance music. The band's instrumentation —especially in latter-day lineups —suggested a double rock band version of Coleman's double quintets. In the early '80s ex–Prime Time members Ulmer and Jackson started their own harmolodic rock-funk bands, and Coleman returned to public performances, touring the U.S. and Europe in 1982.

Song X, a 1986 collaboration with guitarist Pat Metheny (who had covered Coleman tunes on his own recordings), was a critical success; later that year the two men toured together with a band that included Charlie Haden, Jack DeJohnette, and Denardo Coleman. Denardo, who had made his recording debut with his father when he was 10, was now both a drummer in Ornette's band and his business manager.

In 1987 —to celebrate the 30th anniversary of the formation of the original quartet —Coleman released In All Languages, pairing a reunited version of the 1957 acoustic group and a 1987 electric band both covering the same material. Virgin Beauty featured a guest appearance by Grateful Dead guitarist Jerry Garcia, a longtime Coleman admirer. Coleman participated in the formation of the Caravan of Dreams, an arts center that opened in his hometown of Fort Worth, Texas. An affiliated record label released Coleman's next few recordings.

Coleman continued writing for all manner of instrumentation and size; later editions of Prime Time mixed acoustic and electric instruments. In 1993 Coleman's monumental Atlantic recordings were released in an acclaimed CD box set, Beauty Is a Rare Thing.

In 1997 Coleman was inducted into the American Academy of Arts and Letters. Also that year New York's Lincoln Center hosted a festival of his work featuring a performance of Skies of America by the New York Philharmonic and the surviving members of Prime Time; concurrently, a long Coleman composition, "? Civilization," received its world premiere in Paris.

Coleman formed a new quartet in 2004, with two bassists and Denard Coleman on drums, and started the Sound Grammar record label. In 2007, the same year he won the Pulitzer Prize, he received a Lifetime Achievement Grammy Award and performed at the Bonnaroo festival in Tennessee. To the alarm of the audience, he passed out from heat stroke and was taken to a hospital. His final public performance was at Prospect Park in Brooklyn in June 2014, as part of a tribute to him organized by his son.

“One of the things I am experiencing is very important,” he said in his Grammy Lifetime Achievement Award acceptance speech. “And that is: You don’t have to die to kill, and you don’t have to kill to die. And above all, nothing exists that is not in the form of life, because life is eternal with or without people, so we are grateful for life to be here at this very moment.”