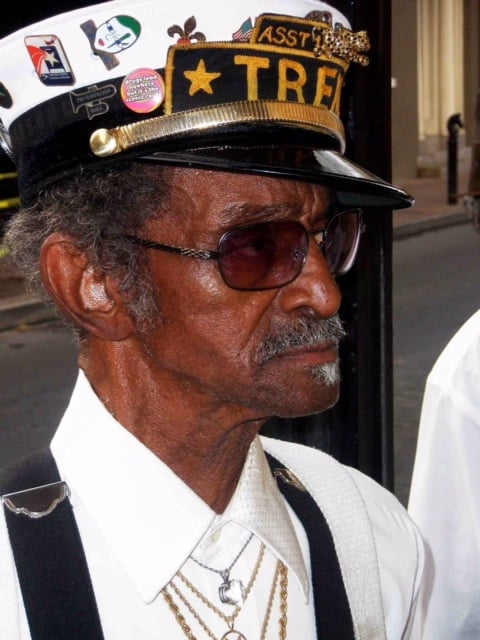 Pricing for A2 and A3 sizes, in 1/1 Editions, available upon request

LIONEL BATISTE
"Uncle" Lionel Batiste (February 11, 1931 – July 8, 2012) was a jazz and blues musician and singer from New Orleans. He began his music career at the age of 11 playing bass drum with the Square Deal Social & Pleasure Club. He was the bass drummer, vocalist and assistant leader of the Treme Brass Band; known for his kazoo playing and singing as well, and has recorded a cd as a vocalist.

Besides inspiring younger musicians with his playing, he served as a role model to many of them: trumpeter Kermit Ruffins calls Batiste his "total influence," saying that Batiste "taught [him] how to act, how to dress, how to feel about life." Internationally, Batiste has served as leader of the daily Moldejazz parade since 2000. He was king of the Krewe du Vieux for 2003.

Batiste was an iconic figure in the brass band community and the larger world of New Orleans music. With his omnipresent sunglasses, a wristwatch worn across his hand, and his kazoo, he literally moved to the beat of his own drum.

Many local musicians cite him as a role model. Trumpeter Kermit Ruffins has referred to Batiste as “my total influence,” who taught Ruffins “how to act, how to dress and how to feel about life."

“Inside Uncle Lionel’s bass drum," said fellow drummer Herman LeBeaux, "is the pulse of the city."

When Batiste was young, his family lived in a house on St. Philip Street in Treme that was demolished to make way for Armstrong Park. He started performing with brass bands as a boy. He first paraded on bass drum at age 11 with the Square Deal Social Aid & Pleasure Club, and worked in the French Quarter as a shoeshine boy. As a young tap dancer, he was occasionally allowed to share the stage with Pork Chop and Kidney Stew, who performed at the Famous Door with well-known bandleader Sharkey Bonano.

In the 1930s, he and several friends formed the Dirty Dozen Kazoo Band, which paraded all over town whenever boxer Joe Louis won a bout.

With the Treme Brass Band, he recorded two albums, anchoring arrangements with his bass drum. “He was steady like a timeclock,” said Benny Jones Sr., who began playing music with Mr. Batiste in 1960, led the Treme Brass Band with him for decades, and married his niece, making Batiste his actual uncle, by marriage.

He occasionally sang in a smooth voice so soft that the band played lower whenever it was his turn on vocals. “You know you’re doing well when you’re constantly trying to do better,” Batiste once said.

His signature slide and hop came from studying an older drummer named Papa Knox. Batiste discovered that his tip jar filled more frequently after he began dancing and clowning onstage. “What else are they going to do,” he said, “when they can’t take their eyes off you?"

Ever the optimist, Batiste carried himself with a distinct elegance and style. During his frequent forays along the Frenchmen Street entertainment corridor, he was an indefatigable, enthusiastic dancer. Along the way, he survived two wives and fathered more than a dozen children.

Despite his sunny public persona, he became deeply depressed about being away from New Orleans after Hurricane Katrina. When he returned, he began joking about his experiences, telling people that he’d climbed on his drum and floated away from his flooded apartment on the first floor of the Lafitte public-housing development.

He was the central figure on posters advertising “If God Is Willing and Da Creek Don’t Rise,” the second installment of director Spike Lee’s Katrina documentary; at one point, Mr. Batiste dominated a billboard that towered over Times Square in New York.

In 2006, he found an apartment at the Christopher Inn Apartments, a multi-story building on Royal Street at the corner of Frenchmen. But his heart remained in the 6th Ward.

He fell ill in April and was hospitalized. On June 26, word spread along Frenchmen Street that, despite being released from a hospital that day, Batiste intended to attend the Treme Brass Band’s gig that night at d.b.a.

Knowing it could be Batiste’s last visit to the club, d.b.a. owner Tom Thayer cordoned off a corner for the musician to sit in his wheelchair, surrounded by his children and grandchildren, and watch the band. Early in the first set, trumpeter Kenneth Terry called out, “Whatcha wanna hear, Uncle Lionel?” The request was “Gimme My Money Back,” a Treme Brass Band standard.

“He was in a wheelchair, very frail, half the size he was before,” Thayer said. “But he seemed to have a great time. He hung out most of the night. He smiled and posed for pictures, and after the first set, he signed every single CD everyone bought. There was a good energy there.”

“And when they wheeled him out,” Thayer said, “the whole place applauded when he left for the last time.”